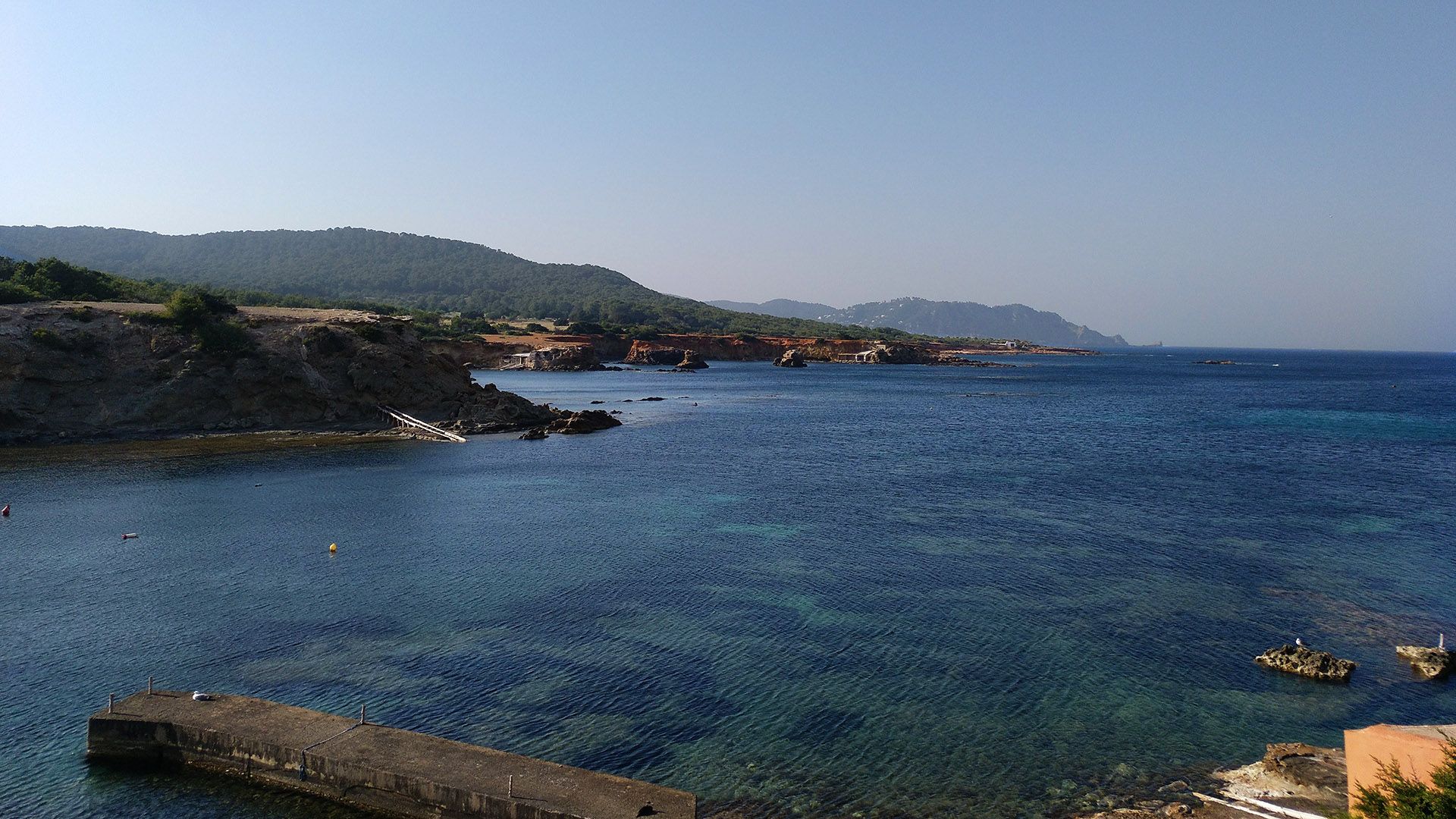 On this occasion, from Visit Ibiza, we want to take you on a tour around the island in a different way and discover incredible and somewhat inaccessible places.

We want to show you 5 very special spots of the Ibizan coast and we will do it from the sea. How? Well, of course there are several ways to do it, but in Visit Ibiza we have chosen the jet ski. We believe that the jet ski gives a certain freedom and allows you to reach the coast in a more comfortable way, especially when it comes to points as abrupt as some of those mentioned here.

Perhaps, of all, is the best known. Atlantis is located on the southwest coast of the island in the Municipality of San José, it is an inactive Marés quarry which was used in the 16th century as an exploitation for the creation of part of the walls of Dalt Vila. Access by land is possible, as long as winter rains don’t make the track disappear. The path is somewhat steep, so we recommend wearing good shoes.

What makes Atlantis special are the vestiges of the quarry, the cuts in the walls remind a little of the Colorado Canyon, but something that makes this place an essential visit are the natural pools that have been formed over the years. Along with images and prints made by visitors on the quarry walls, we find another series of images, this time painted on the rock of a cave located just before finishing the descent to Atlantis, this cave was a place of worship for many Hippies newcomers to the island in the 60s.

If you decide to visit the area by jet ski, don’t miss the famous rock of Es Vedrá, a short distance from Cala d’Hort and Atlantis.

The descent to Ses Balandres in Santa Inés, can be somewhat complicated, although fishermen who go down regularly make it seem very simple, remember, they are used to it. It is not that you need to be an expert in climbing, but if you are afraid of heights, it may be better to go on the jet ski.

That said, if all of the above doesn’t stop you, this descent is highly recommended and the prize is worth it. The tranquility that you feel in this area, is spectacular.

Another attraction of Ses Balandres are the views. In front, we find the island of Ses Margalides, but on clear summer days, from the top, you can see the Iberian Peninsula.

A cove protected by its horseshoe shape in which we find a couple of fishermen’s houses. With calm and crystalline waters, Es Portitxol is located in the North of the island near San Miguel.

To get to the beach we’ll have to leave the car in the residential area of Isla Blanca and do the rest of the way on foot, a beautiful walk. But access by boat or jet ski is amazing and, perhaps, the best option.

Once in Es Portitxol don’t expect a beach of fine white sand, the cove is of còdols (pebble stones) which makes it even more special. But the most impressive thing about this beach is, apart from its shape, its seabed, perfect for snorkeling.

Perhaps, of all the ones we show you here, it’s the one with the easiest access, but it’s still a very special beach. Pou des Lleó, is located in the northeast area of the island, near San Carlos. The beach itself is sand, seaweed and stones, is full of fishermen’s huts and, not far from it, we find one of the 7 watchtowers, the Torre d’en Valls.

The views from the beach of Pou des Lleó are incredible but if we walk a little and climb the plateau that forms the beach, we’ll discover a spectacular landscape of rock formations.

Although today it’s a cove of calm waters and fishermen, in its day, and as some popular songs tell, Pou des Lleó was a usual beach among pirates. In addition, at the start of the Spanish Civil War, Republican troops landed on the island from here. 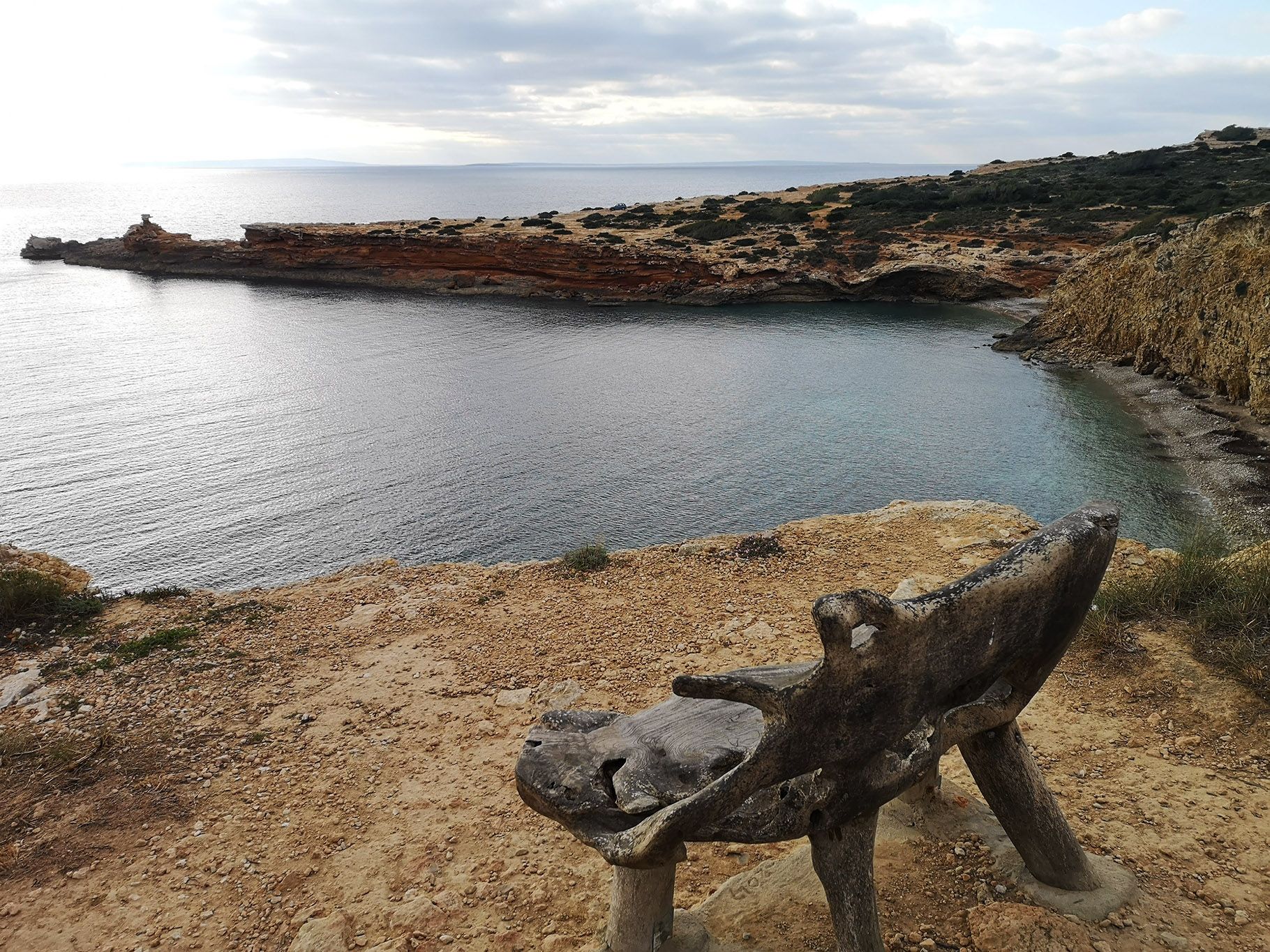 This cove, located near Ibiza town is a surprise. Cala Tranquila is a small gravel cove but with a perfect seabed for a day of relaxation and snorkeling.

It’s a small cove with easy access and a lot of tranquility. It can be reached by car, but a walk from neighboring Talamanca along the coast can be very rewarding.

And if you like to swim and explore, you can reach another small neighboring cove, which has no access by land. Both are perfect to arrive with a jet ski. 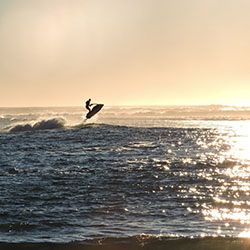 A space in which Visit Ibiza wants to share with you the news and events that take place in Ibiza … Do not miss on anything!